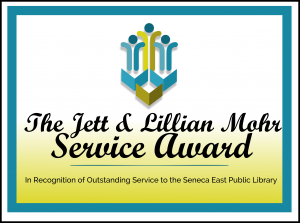 A Little History. The award is given in honor of the two people most influential in helping establish the Attica Public Library (now the Seneca East Public Library). The Reverend Jett Mohr became the first offical librarian around 1934 and served in that capacity until 1972 when his resignation, with regret, was accepted by the Board of Trustees. He was made Honorary Librarian at that time. Rev. Mohr passed away in 1974. He became known as the Father of the Public Library. Mrs. Lillian Mohr, wife of Rev. Mohr, began story hour in 1936 when the State Library of Ohio offically recognized the Attica Public Library. She passed away in 1954.

Saying "Thanks" The SEPL Foundation established the award in 2014 to be presented annually at the reverse raffle and auction. Its purpose is to recognize an individual or group who has significantly supported the Seneca East Public Library or the SEPL Foundation.

Consideration for the award is given for support that includes any of the following: