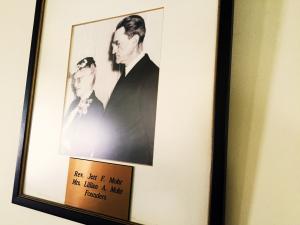 In the early 1900s, the records of the Woman’s Literary Guild showed an interest in providing a Reading Room for the community.

In 1920, subscriptions for the establishment of a public library (or Reading Room) were sold at $1.00. The Woman’s Literary Guild gave $50 towards this new venture.

In 1924 the public library was established. A call was put out to the community for books. Since the newly established library was housed in the same room as the Justice of the Peace, Edgar Bernard, the Justice, became the first librarian. He and several other prominent men also donated books for the collection.

The Rev. Jett Mohr became the first official librarian when Mr. Bernard left his offices. It was Rev. Mohr who became known as the Father of the Public Library.

In 1938 the Library began receiving county money and may have briefly been named the "Attica County Library" (i.e. "a library of the county"). The Attica Rural Library seems to be the more accepted name of the time.

In the 1940s, the library started receiving state money from the Intangibles Tax and became an official "school district public library". The Library changed its name to the Attica Rural School District Public Library to reflect the new taxing authority. The library ceased being a town library and now included all of Venice Township. At first the library only received money once a year. At some point it became quarterly but often the amount received was unknown. Finally in 1986, the library began to receive the money on a monthly basis in standard amounts.

In 1942, a jewelry store owned by Icedore Kaufman at 14 North Main Street was vacated and the Library was able to rent the building. One night after closing, all the books were carried down to the new building. The building later became the property of Cora Raymond who continued to lease the building to the library.

In 1954 Mrs. Mohr passed away. Doris Bunn was hired as Assistant Librarian.

In 1959, Mrs. Raymond, the owner of the building decided to sell the building to the library at the lowest possible cost. The community was asked to make pledges towards the building and the $4,000 was raised within three weeks.

In the early 1960s, the building was remodeled adding two bathrooms and dropping the ceiling.

In the 1970s, an outside weather porch was added to the storefront and the local Lion’s Club donated an air conditioner.

In 1974, after 30 years of continual service, Rev. Mohr passed away. Mrs. Bunn became librarian until her retirement in 1984. She also served for 30 years and was honored in 1994 with a picture of her joining a picture of the Rev. & Mrs. Mohr on a library wall.

In 1985, Vicki Ayres (later Eckenrod) became Library Director. At this time, one part-time worker was also employed at 2 hours per week and the library received $30,000 in funding.

In December of 1990, a fire was set in the video store next door. The library received extensive water and smoke damage. Most of the collection survived and was able to be salvaged at a cost of over $50,000. The library moved temporarily to an old tractor parts store in a Quonset hut at the edge of town previously owned by Bohn Implement.

The library received an LSCA Title II Construction Grant, which allowed the library to be rebuilt on its original site with the addition of two lots, one purchased from Charles Bates and one donated by Martha King.

In 1992, the new library was complete and a full-time Children’s Librarian was hired, Mrs. Barbara Bayer. Mrs. Bayer had been hired as part-time help in 1988. Learn more about the fire HERE.

In 1996, the State Library of Ohio purchased computers and placed internet service in all 250 public libraries.

In 1999, the library purchased the old Attica Café and plans were drawn up for a new library annex. The new addition contains a new, expanded Children’s Area and a History Room where the Attica Area Historical Society resides. An Open House/Dedication was held August 5th, 2001.

In June of 2002, the library entered the technology age with the debut of it's web site at www.seneca-east.lib.oh.us

In 2005, The Seneca East Public Library Foundation was established as a 501(c)(3) non-profit organization to help raise funds for the library and to assist in community services.

In 2008, Barbara Bayer was promoted to Director after Mrs. Eckenrod took a new position at Galion Public Library. Senate Bill (SB) 185 changed the name of the LLGSF to the Public Library Fund (PLF), more clearly identifying its purpose. The PLF was set at 2.22% of the state’s General Revenue Fund. Meanwhile, the nation’s economy began heading toward its historic crash. Library funding from the state was in a downward spiral.

In 2009, the library upgraded to a new dynamic website www.senecaeastlibrary.org.

The governor proposed a 30% cut to the PLF on top of projected 20% losses due to declining revenue. Public library patrons quickly mobilized and mounted an unprecedented response including an impassioned email and social media campaign. The initial proposal was rejected and ultimately the PLF was reduced to 1.97% of the General Revenue Fund, an 18% loss.

In November 2011, the library asked the voters to pass a 5-year ¾ mill levy to supplement the languishing state library funding. The levy passed and the library began collecting levy funds in January of 2012.

In 2014, The SEPL Foundation established and awarded its first Jett & Lillian Mohr Service Award to be presented annually at the reverse raffle and auction to recognize an individual or group who has significantly supported the Seneca East Public Library or the SEPL Foundation.

Public libraries rallied with the “Restore the PLF” campaign. As a result, state legislatures restored some funding to the PLF from 1.66% to 1.7%. This coupled with economic growth resulted in a 10.4% increase in 2015 but because under-realized state revenues this was not the case in 2016 and 2017.

In 2015, Shannon Featheringill was hired as Full-Time Children’s Librarian after working as circulation clerk since 2008.

The library placed and passed a renewal levy on the November ballot and began collecting those funds in January of 2017.

In 2018, the ceiling of the main floor of the library was resurfaced with sound absorbing material that had become soiled with age. The walls also received a fresh coat of paint.

In 2019, the library celebrated the retirement of Barbara Bayer and her 30 years of service. Shannon Featheringill was promoted to Director.